We’re committed to being there for our customers in need – particularly those who are more vulnerable and at risk of domestic violence and financial abuse. Find out more about financial abuse, how to recognise it, and the steps you can take if you or someone you know is experiencing it.

Financial abuse is a serious form of family and domestic violence that occurs when an abuser uses money and resources as a means to gain power, and to control their partner or family member.

We're committed to being there for customers in their times of need, including those experiencing or who have survived family and domestic violence and financial abuse.

Financial abuse is a hidden epidemic that often occurs in the community through a lack of awareness and understanding. It can be harder to recognise than some other forms of abuse.

Financial abuse can be influenced by factors such as culture, disability, addiction and mental illness, bereavement, and more. It's important to understand what it looks like, so you can start taking the steps to getting support.

We’ve conducted research to explore the current understanding of and attitudes towards financial abuse in WA. See the full report.

of West Australian adults have experienced or know someone who has experienced financial abuse.

West Australians agree that financial abuse is a widespread problem in Australia.

More than one in ten

West Australians admit to having been a perpetrator of financial abuse.

Despite its prevalence, financial abuse can be difficult to recognise so it’s important to learn the signs, where to go for help, and how to support a family member or friend who may be at risk. This can help survivors to recover and regain their financial independence.

There can be some signs of financial abuse to look out for, including your partner or someone close to you:

There are also many other forms of financial abuse – make sure you check out our guide to learn more.

How to take action

In an emergency or if you’re not feeling safe, always call 000.

For confidential information, counselling and support, we recommend calling 1800RESPECT on 1800 737 732. This is a free and confidential service that isn't part of Bankwest or the CBA Group. If you need an interpreter or translator, you can ask for one and the counsellor will make the arrangements.

If you’re worried about behaviour, there is free and confidential support available. Call Men’s Referral Service on 1300 766 491 or chat online at ntv.org.au.

See more resources and ways to get support

We’re committed to being there for our customers when they need us the most, particularly those who are more vulnerable and at risk of domestic violence and financial abuse, which is why we're passionate about supporting the State Government's 16 Days in WA campaign – as we have done since its inception.

The 16 Days in WA campaign is an annual initiative of the WA State Government that runs from 25 November (International Day for the Elimination of Violence Against Women) through to 10 December (Human Rights Day).

The campaign takes its inspiration from the global 16 Days of Activism Against Gender-Based Violence to drive a change in culture, behaviour and attitudes that lead to violence against women and their children.

For 16 days, the WA community is invited to create change during the campaign – to educate, motivate and advocate in your community, and stand up to stop violence against women.

Each year, we accompany our partnership of the 16 Days campaign with a range of customer, community, and colleague initiatives to help educate, inform and provide support on this critical issue affecting our state and nation. 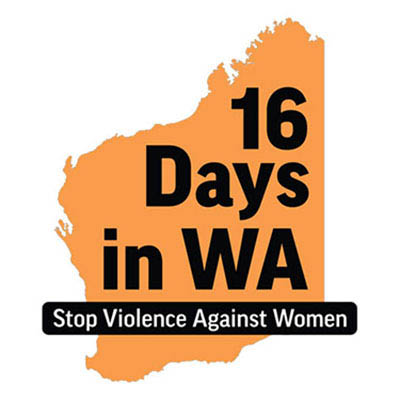 Support for our customers

Here are some other ways to get support:

The Financial Independence Hub, which is supported by the CBA Group, is a free, confidential, personalised service supporting people impacted by domestic violence and financial abuse across Australia to build their financial independence and achieve their goals.

The Centre for Women’s Safety and Wellbeing (CWSW) works to prevent domestic, family and sexual violence against women and their children, promote women’s health and wellbeing, and advance gender equity.

The Centre has launched a service directory that features all the specialised family and domestic violence services that can be found throughout Western Australia.

Your Toolkit is a website which helps women who have experienced domestic and family violence. It provides links and telephone numbers to key organisations, and things to consider doing when someone is facing difficult and challenging situations. To make it easy to use, the information provided has been divided into four sections: Prepare, Act now, Rebuild and Thrive.

It has been built in consultation with women who have experienced domestic and family violence, support workers and industry professionals who understand the needs of women and families experiencing abuse.

Your safety is our priority

In an emergency or if you’re not feeling safe, always call 000.

For confidential information, counselling and support, we recommend calling 1800RESPECT on 1800 737 732 or visiting 1800RESPECT online. This is a free and confidential service which isn't part of Bankwest or the CBA Group. You can also ask for an interpreter or translator if you need one.

Family violence can affect anyone, regardless of sex, age, race, sexuality, disability, gender and lifestyle. If you are experiencing violence, support is available. Call Men’s Referral Service on 1300 766 491 or chat online at ntv.org.au.

We know life happens. When things like losing your job, injury and illness, and emergencies and natural disasters happen, we’re here to help. We're also here for immediate support if you've lost a loved one, and have a guide to help older people avoid financial abuse, scams and fraud.

If you’ve had a change to your personal circumstances, you may find it hard to keep up with your repayments. We’re here to help, and we could help you manage your credit card or loan repayments with a solution tailored to your situation.

You can message us in the Bankwest App or online banking, or call us – we’re here 24/7.